Hall of Fame Track and Field Coach and SDSU alumnus Bob Larsen is widely recognized as one of the most innovative, influential, and visionary American running coaches of all time. His coaching career is studded with remarkable achievement from the high school level straight through to the Olympics, and he is often credited for his role ushering in the new American era of competitive distance running. 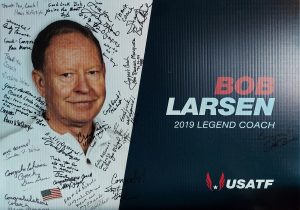 Larsen’s personal talent as a runner was first discovered by Raleigh Holt, Track and Field coach at Hoover High School in San Diego, shortly after Larsen and his family moved to the city from his childhood home in northern Minnesota. Holt was also the first to recognize in Larsen the characteristics of a good coach and encouraged him to pursue coaching in college. His senior year, Larsen won the City Championships in the mile, and was offered scholarship assistance to attend SDSU (then San Diego State College) the following year. Larsen went on to earn both his bachelor’s (‘61) and masters degrees (‘67) in physical education from SDSU, along with a minor in history.

“For me, San Diego State was just perfect, and I had several great instructors there,” shared Larsen. “All the classes I took over the years had an influence on me, and how I would go on to coach and teach.” Among his most notable influencers was Dr. Fred Kasch, who served as a professor in SDSU’s Physical Education Department. “Fred was ahead of his time in many ways, in terms of science and applying it to exercise physiology,” Larsen shared. “I actually had the great honor of working for him grading papers during my senior year, and then I continued to do that as a graduate assistant as well. He was outstanding, and I learned a lot from him.” Other instructors who influenced him significantly included George Ziegenfuss, who coached basketball and taught introductory courses in physical education; Paul Governali, who served as head coach for football as well as Larsen’s graduate thesis advisor; and Don Coryell, who took over the football program after Governali, impressing Larsen through his work ethic and ability to motivate people.

Larsen ran for SDSU throughout his college career. During his time as a graduate assistant, his coach Choc Sportsman offered him a position coaching SDSU’s distance runners. Sportsman later offered Larsen a permanent assistant coaching position that Larsen turned down due to a desire to begin his professional coaching career at the high school level. He soon accepted a position at Monte Vista High School in Spring Valley, California, where he remained for four years. During that time, he led his cross country teams to four California Interscholastic Federation (CIF) titles.

From Monte Vista, Larsen was recruited by Ron Vavra and Jack Mashin to coach at nearby Grossmont College, where his teams won seven state titles in a row and nine consecutive conference titles. During his tenure coaching at Grossmont, his distance runners set 11 national community college records. “I had so much fun with those guys. We were better than many Division 1 schools, both in cross country and track. It was really the golden era of the community colleges.” 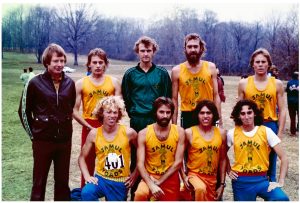 While Larsen was coaching at Monte Vista and Grossmont, he co-founded and served as head coach for the Jamul Toads, a track club that was started largely as a means to keep his runners in shape in the off-season. This underdog cadre of runners shocked the nation in 1976 when they beat the best teams around the country to win the AAU National Cross Country Championship in Philadelphia. The story of the Toads and their stunning victory is heavily featured in Robert Lusitano’s documentary of Larsen’s life, titled City Slickers Can’t Stay with Me: The Coach Bob Larsen Story (available on Amazon), as well as New York Times’ deputy sports editor Matthew Futterman’s riveting best-seller, Running to the Edge: A Band of Misfits and the Guru Who Unlocked the Secrets of Speed.

After twelve years at Grossmont, Larsen was recruited to UCLA in 1979 by Jim Bush, where his cross-country teams won the first Pac-10 Conference titles in school history. He took over as head track and field coach in 1984. During his tenure, the Bruins achieved eleven Pac-10 titles, two National Collegiate Athletic Association (NCAA) Outdoor Championships, nine Top 10 national outdoor finishes, and four National Dual Meet Championships. He was a four-time NCAA National Coach of the Year and eleven-time Pac-10 Coach of the Year. 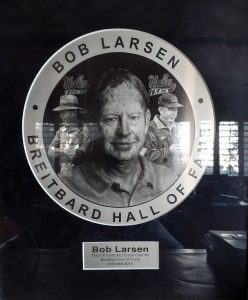 Larsen was inducted into ten Halls of Fame, including the San Diego County Breitbard Hall of Fame, the U.S. Track Coaches Association Hall of Fame, and the National Track and Field Hall of Fame. In 2019, Larsen was honored as the sixth Legend Coach by U.S.A. Track & Field (USATF).

Throughout Larsen’s career, he maintained a commitment to understanding the science behind running, just as he’d first learned to do in his years at SDSU with Fred Kasch. Earlier in his coaching career, he co-led a trip to Europe for a group of U.S. coaches to learn about the advancements that European coaches were making with regard to running mechanics and training techniques. Conventional wisdom maintained that distance running was all about physiology, but Larsen understood that when physiology was coupled with stride mechanics and with drills like bounding and depth jumping, it could make a tremendous difference in a runner’s efficiency.

Part of the reason that Larsen retired from UCLA in 2000 was to help U.S. distance runners get back to an internationally competitive level.  At the Olympic Marathon Trials in 2000, not a single male runner achieved the Olympic “A” qualifying standard of 2:14; therefore, the United States could only send one American marathon runner to the Sydney Olympics that year. That runner, Rod DeHaven, placed 69th in Sydney, a full 20 minutes behind Gezahenge Abera, an Ethiopian runner who won that year with a finishing time of 2:10:11.

“We knew the best runners in the world, those who were getting on the podium in international competition, were training at altitude—and Americans weren’t seriously training at altitude in those days,” shared Larsen. He became convinced that the American breakthrough would require a commitment to altitude training, so he and retired Adams State coach Joe Vigil established a training camp in Mammoth Lakes, California (7,800 feet), where Mebrahtom “Meb” Keflezighi (whom Larsen recruited to UCLA in 1994), Deena Kastor, and several other runners trained consistently in the thin mountain air of the Sierra Nevadas.

Flash forward to 2004. With Larsen as Olympic distance coach, Meb and Deena both took home medals from the Olympic Marathon in Athens, having placed 2nd and 3rd in their races respectively. These were the first U.S. Olympic marathon medals in 28 years for men and in 20 years for women. The progress the American team made in just four short years defied all expectations and set the stage for a new era in American distance running, where elite runners now regularly train at altitude to compete at the highest levels against runners from around the world.

With Larsen as his coach, Meb achieved tremendous success in his career as a runner. In 2001, he set a new American record at 10,000 meters (27:13). He won more than 20 national titles in cross country, in road races, and on the track, and made four U.S. Olympic teams. Notably, he is also the only athlete in history to win The New York City Marathon (2009), The Boston Marathon (2014), and an Olympic medal. Meb’s success, and the subsequent success of other American distance runners, has inspired millions and helped to popularize the sport of running in America. Over the past two decades, record numbers of people have registered for races at all distances, from 5,000 meters to the marathon. 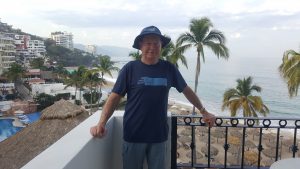 Today, Coach Larsen remains active in the running community and continues to run himself most days. The scientific understanding that he brought to the sport continues to be the bedrock of many runners’ training programs. He is widely recognized as one of the greatest running coaches of all time, both due to his quest to understand and master the factors that contribute to efficiency, as well as his ability to get the most out of his runners. “Do a little bit each day,” Larsen responded when asked if he had a mantra for living. “That keeps the momentum going. You have to overcome inertia in so many things you do. We all have terrible days and things don’t always go well, but if you just do a little each day—get things started—you’ll keep heading in the right direction.”