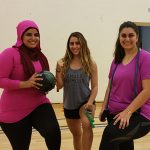 SET (Sisters Exercising Together) has made an appearance this week on SDSU’s News Center speaking about the new program Dr. David Kahan created. It is an exercise program just for Muslim women to work out together in a safe environment where they have the opportunity to exercise, have fun and connect with other Muslim women.

“During his research of physical activity among San Diego’s Muslim community, San Diego State University kinesiology professor David Kahan saw a need to remove barriers for female Muslim college students at SDSU. He found most Muslim women preferred exercising in single-sex settings with female instructors, but did not have a place to do so at SDSU – until now.”