You are here: Home / People / Emeritus – In Memoriam / William Terry 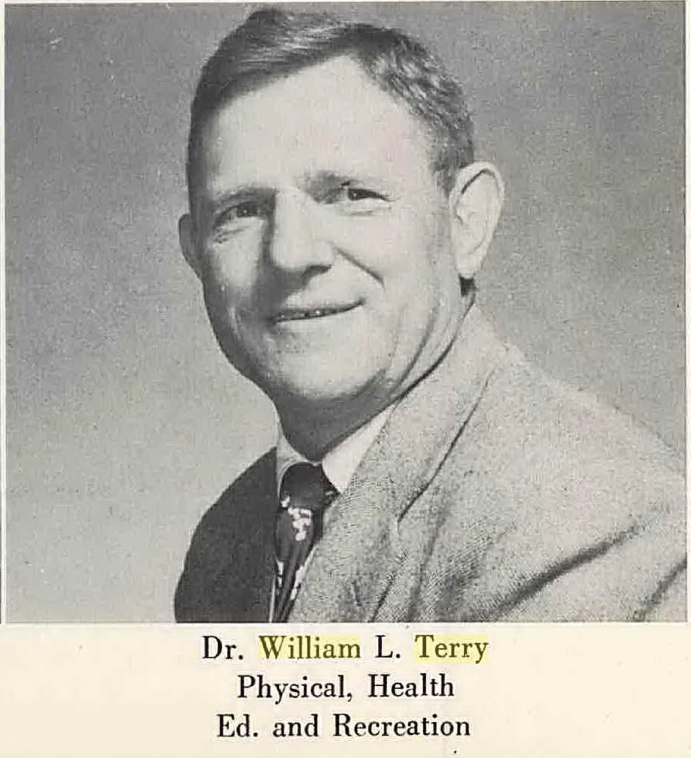 William Lester Terry was the first-born of five children (three sisters & a brother) of William Lester Terry (Sr.) and Barbara Ann May. The family lived in Fords Ferry, Crittenden County, Kentucky where his father Lester (used his middle name as his first name on Census reports) was a farmer. Young Bill grew up on the family farm.

Bill went off to college and graduated with the A.B. degree from Western Kentucky Teachers College. He went to graduate school in Indiana, receiving an M.S. degree at Indiana University.

He married Barbara Ann May, a native of Kentucky, and they had one daughter named Barbara J. Terry, who was born in 1932. Records indicate Bill took the additional graduate study at the University of Kentucky and University of Illinois. By the time of the 1940 U.S. Census, he was Director of Physical Education at his alma mater, Western Kentucky Teachers College, located in Bowling Green City, Warren County, Kentucky.

Dr. Terry remained in the leadership position of Division Chair and oversaw significant change within the Division between 1948 and 1970. The successful Athletics Department was within the Division until 1969. In 1970 the Division was replaced by the College of Professional Studies as a part of campus reorganization. Bill continued as a faculty member in the Department of Physical Education until retirement in 1974. He was Professor Emeritus for the remainder of his life.

He and wife Barbara spent the later years of retirement in Rapid City, South Dakota, near the home of their daughter Barbara Potter. Bill passed away at age 83 in 1991 and was buried at Black Hills National Cemetery in Sturgis, South Dakota. Wife Barbara died in 2001 and is buried next to her husband.