You are here: Home / People / Emeritus – In Memoriam / Ruth Talboy 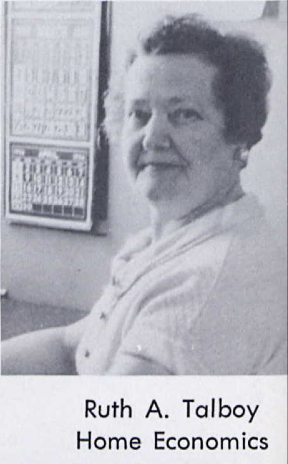 Ruth Talboy was one of five children of William Robert Talboy and wife Lena. She had three sisters and one brother. All were born in the state of Nebraska where their father William R. Talboy was a physician with a general practice. She and her siblings grew up in the Village of New Castle, Dixon County, Nebraska.

Ruth graduated with a B.S. degree from Iowa State University and an M.A. degree from Stanford University. She worked as a State Supervisor of Home Economics programs in Reno, Nevada (1930) and by 1940 she lived in San Diego, California where she worked as a Supervisor in public schools. Her widowed mother Lena and sister Margaret lived with her at that time.

She was hired by San Diego State in 1947 as Assistant Professor of Home Arts and became Head of the Home Economics Department. She remained in that position until 1960. ). A new building was constructed (1957) during her time as Head, to house academic programs in the Department. The building was first known as Home Economics, then as Family Studies & Consumer Sciences, until 2004. She retired at the rank of Associate Professor with Emeritus status in 1963.

Ruth retired in the city of San Diego. She lived another 12 years. Ruth passed away in January of 1975 at the age of 75.