You are here: Home / People / Emeritus – In Memoriam / Ralph Grawunder 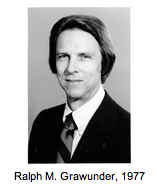 Ralph Morris Grawunder was born in 1929 and was raised in the state of Texas. He was the son of Ernest Morris Grawunder and Hilda M.W. Krueger. His father Ernest, a farmer, died (appendicitis) in 1930 before Ralph reached his first birthday. His widowed mother, Hilda, married farmer Lester Gross. They lived in Houston, Texas (1940 U.S. Census).

Ralph went on to college at Rice Institute where he where he played basketball and competed in track. He received his Bachelor’s degree from Rice Institute and during his studies was married to Joyce Jeanette Strasding, his high school sweetheart. They became the parents of three daughters, Gretchen, Robin, and Johanna.

Ralph went on to graduate school at Teachers College of Columbia University where he achieved his M.A. and Doctorate (Ed.D.) degrees. In 1955, by the age of 26, Ralph was appointed Instructor in Physical Education at San Diego State, where he began a long and productive career. His specialization was Health Education. He served in various capacities from 1955 until his retirement in 1991. He was ultimately promoted to the rank of Professor.

Ralph retired in 1991 as Emeritus Professor of Physical Education. He and wife Joyce lived the remainder of their lives in San Diego. Ralph passed away in 2009 at age 79. Joyce died a year later in 2010.

Details of his life, stellar career and family are well summarized in his Obituary published in the Houston Chronicle.

Ralph Grawunder grew up in Houston, Texas and attended Rice Institute where he obtained his bachelor’s degree and was a star athlete, lettering in both track and basketball. (He was one of the four members of the track team that held for a brief time the world record in the 4×400 yard relay) While at Rice he married his high school sweetheart Joyce Strasding.

He was persuaded by a mentor professor to take up studies at Teachers College, Columbia University, where he obtained his doctorate in health education. In 1955 he was hired to teach at San Diego State College (which, in 1970, became San Diego State University) in the Division of Physical Education, Health Education, and Recreation. He taught health education classes and was also the assistant track coach. He became the Chair of the Health Education Department in 1962. In the early 1960s, he was the lead instructor in an entirely innovative required television course, Introduction to Health Education. At this time he was also at the forefront of the anti-smoking campaign and was instrumental in getting the University Senate to approve the early regulations.

In 1966 he played a vital role in the planning and implementation of “Smoking Research,” a federally-funded experimental anti-smoking program, one of the first in San Diego. Ralph had active roles in the Lung Association, American Heart Association, and the American Cancer Society. He wrote a best-selling text book ‘ Life and Health’ which ran into several editions. During his years in the Health Education department (which formally separated from Physical Education in 1970 to become ” Health Science”), Ralph was always a strong supporter of the link between physical activity and health education.

He was an exercise leader for many years in the Adult Fitness Program directed by his colleague, Dr. Fred Kasch. After departmental reorganizations in the early 1980’s, he returned to teach in the Physical Education department as it’s emphasis moved towards the integration of fitness and health and away from competitive sports – a direction that pleased Ralph. Courses required of all graduates, such as “Exercise and Health,” “Introduction to Kinesiology,” and “Musculo-Skeletal Fitness,” were in large part developed by him.

He retired from the University in 1991 after 36 years of service. He was an exemplary devotee of cardiovascular and muscular fitness throughout his career and long into retirement. He was greatly admired by colleagues and students alike for his total commitment to the active lifestyle. In his University work, he could be counted on to address all sides of any discussion with candor, to be fearless but sensitive: he was probing in his approach to everything, but always willing to listen and concede with grace and humor whenever his thoughts did not prevail. He was always exceedingly supportive and encouraging of younger colleagues. Apart from the accomplishments of his professional life, Ralph was a man of broad intellectual interests.

He was a wide- ranging and eclectic reader and thinker, always eager to venture into a deeper level of discussion. Somehow, he would find an opening to venture into talking about particle physics, mathematics as a tool of science, the influence of language on philosophical frameworks, the bases of religion, the poetic power of a T.S. Elliot or a Dylan Thomas, and other “heady” subjects. Reams of poetry, delivered without a pause, flowed easily from his lips. In discussion, Ralph would dig and probe, always loving the journey of thinking, and he was a wonderful companion on that journey. As in his professional life, he was never afraid to ask awkward questions or throw doubt on sacred “truths.” He was never in a discussion with a purpose to win or to impress anyone. He pursued discussion because he loved to learn and to round out his thinking, to explore all the fascinating corners of knowledge.

Even in confronting his illness he was fascinated by an understanding of the process, never complaining and always amazingly lucid, composed, and brave. That itself was remarkable testimonial to a very remarkable man. He will be greatly missed. Ralph had great love for his family, taking great pride in their accomplishments and especially in their character. He is survived by his wife of 58 years, Joyce, his three daughters, Gretchen, Robin, and Johanna, sons – in – law Rex, Tony, and Mark, and had great pride and enjoyment in his three grandchildren, Erica, Amanda, and Christopher.”