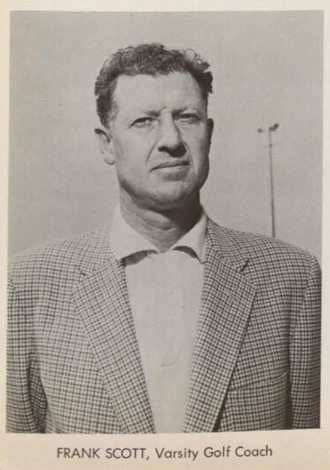 Frank Lester Scott was born in 1910 and was raised in Bondurant, Iowa. He was the son of Lucy Anderson and Frank E. Scott. He had two older sisters, Belle and Mildred. His father was a hardware store merchant.

Frank Lester Scott attended Grinnell College and received his Bachelor’s degree in 1931. He went on to graduate school at the University of Michigan where he completed his M.A. degree in 1940.

He was married to Adelaide Louise Larson of Kirkman, Iowa on July 6, 1937. She went with him to the University of Michigan where she worked as a secretary during his time in graduate school. They had one son named Steven. They divorced sometime after moving to San Diego.

After the onset of WW II, Frank joined the Air Force in 1942. He served during WW II, and later in Korea. He reached the rank of Lieutenant Colonel.

Frank was appointed Assistant Professor at San Diego State in 1947, where he taught and became Head Golf Coach. He coached the Men’s golf team for over 30 years and was a well-regarded coach. He coached 52 players who eventually became future professional golfers, including Gene Littler and Craig Stadler.

Frank had a second wife, Helen M. Scott. With Helen, he had two more children, daughter Susan and son Thomas.

Frank was promoted to the rank of Professor and retired from teaching in 1977. SDSU records indicate he continued to coach beyond retirement until 1983. In 1995, Frank was elected posthumously to the San Diego State Aztec Hall of Fame for his successful career as SDSU Golf Coach. Frank passed away in 1986 in San Diego.