You are here: Home / People / Emeritus – In Memoriam / Florence Shafer

Florence Shafer was a native of Illinois, daughter of Frederick Shafer and Alice Hardy. She received her undergraduate degree at the University of California in Berkeley, California.

Her career began as a public school teacher. She also worked at a Y.W.C.A. in California and Colorado. She later completed her M.S. degree from the University of Southern California.

In 1933, Florence was hired as an Instructor in the Department of Physical Education for Women at San Diego State. She taught courses, such as Recreational Leadership, Techniques of Individual Sports, Sports Methods and Swimming. In 1940, she was still single and living with her friend and colleague in Physical Education, Esther Pease. In 1946-47, during World War II, Florence took a military leave of absence. Before her return in 1947-48, she had married Ezra Lee Shannon. Her married name was Florence Shannon. 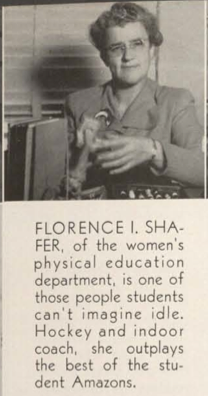 Her career at San Diego State went on for many years. Her husband Ezra died in 1955. She continued her teaching career until retiring in 1963 as Emeritus Associate Professor of Physical Education. Florence lived until 1971. Her age at death was reported to be 64, but it was more likely age 69.