You are here: Home / People / Emeritus – In Memoriam / Charles Sportsman 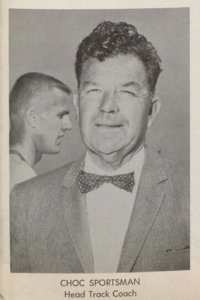 Charles Sportsman grew up in the state of Texas, the son of Jack Sportsman and Hattie Rebecca Osburn.

He graduated from North Texas State Teachers College.  “After a year as Deputy District Clerk of Collin County, he became a member of the Physical Education staff at North Texas University. He served as head Track Coach and Assistant Football Coach for 13 years. When World War II broke out he enlisted in the US Navy and served 45 months as a Military Training and Physical Fitness officer. He was retired from duty with the rank of Commander. He attended graduate school at the University of Southern California and completed work on his Master’s Degree.” (From Obituary)

“He then joined the faculty of San Diego State College where he was Head Track Coach for 20 years. He retired in 1968 and served as coach of the Olympic Team of Greece for Track and Field for the summer games at Mexico City.” (From Obituary)

He married Jennis Rebecca Tunnell in 1926. They had two children, Beverly Anne and William W. Sprotsman. Charles died in 1994 and wife Jennis died in 2005. Both are buried in Van Zandt County, Texas.

In 2013 Charles “Choc” Sportsman was inducted (posthumous award) into the San Diego State Aztec Hall of Fame for his contributions as Head Coach of Track & Field  (1947-66).