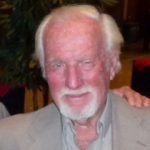 Richard W. Wells was born in Glendale, California. Dick’s formative years were spent in Los Angeles where he attended North Hollywood High School. He was a leader, serving as Senior Class President (1949) and athlete, receiving all San Fernando Valley and L.A. City honors in football.

He attended Occidental College where he graduated in 1953 with a B.A. degree in Physical Education. He was a 3-year letterman on the Occidental football team and a member of Phi Gamma Delta fraternity.

He attended graduate school at San Diego State College (1961-63) where he was appointed Instructor in 1961. He received his M.A. degree in Physical Education in 1963. Later he attended Cal Western College and U.C.L.A (1970-1974) where he completed courses toward a doctorate.

Dick continued to serve on the faculty at San Diego State from 1961 until his retirement in December of 1995. He had a long and productive career. His teaching was primarily in the teacher preparation and sports activity areas, including introductory P.E., organization and administration of P.E., and teaching methods.

He coached freshman and JV football teams (1961-64) and was Head Track & Field Coach for 10 years (1961-1972). His track and field teams were NCAA College Division Champions in 1966 and 1967. He coached numerous College Division All-Americans, including Arnie Robinson, who later won an Olympic bronze medal (1972) and then an Olympic gold medal (1976) in the long jump. Dick also directed the U.S. Olympic Track & Field summer training program in 1971 and 1972 for sprinters and hurdlers.

Dick served as Department Chair of Physical Education from 1973 to 1978. For many years (1968-1990) he directed the Summer Youth Fitness Program at San Diego State. In addition he served as undergraduate advisor for physical education majors from 1978 to 1995, at which time Dick retired as Emeritus Associate Professor of Physical Education.