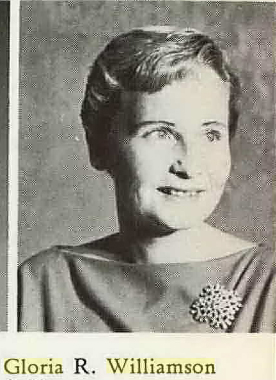 In 1960 Gloria was a faculty instructor at Colorado State, where she was sponsor and advisor for the student Latin American Dance Club.

In a 1998 ENS Majors’ Newsletter, Newsletter editor Dr. Rebecca Quinn wrote about Gloria: “Speaking of Gloria Williamson, one of the most beloved teachers our department has ever had, she and husband Chuck have moved back to California and Redding is the lucky city. Gloria says they love being surrounded by mountains and lakes, the snow caps in the distance and of course the back yard swimming pool.”

In 2017, web sources show Gloria and Charles live in Casa Grande, AZ, but also having lived in Coeur d’Alene, ID, and Redding, CA.